The creation of [angle X] and [angle Y] is explained in the tutorial video, so please refer to that as well.
-> Basic Tutorial 5. XY facial motion

The following is an example of creating 8 face orientations utilizing the [Automatic Generation of Four Corner Forms].

How to Use Automatic Generation of Forms for the Four Corners

First, make four directions, up, down, left, and right.

As a preliminary step, unlock the part that contains the object from which the form was created.
Click on the lock icons in the figure below to lock and unlock the unit at once. 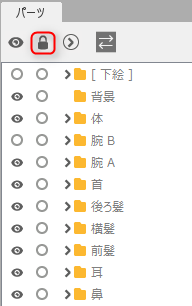 TIPS
The same operation can be performed in the Palette menu of the [Parameter] palette under [Automatic generation of four corner forms]. 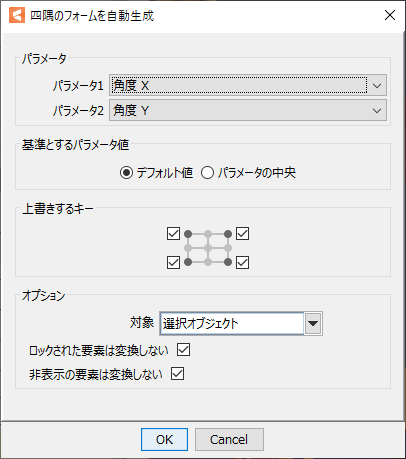 In [Parameter 1] and [Parameter 2], select the parameters to which you wish to apply the blend.
In this case, we will create a face orientation XY, so we will use “angle X” And “Angle Y”.

The [Options] section is primarily concerned with the blending target.
In this case, since we are creating both ArtMesh and Deformer forms for the orientation of the face, we set the target to [All drawing elements and deformers].