This section describes the skinning function.

Watch the video below to learn about the skinning function.
* The beta function was replaced by the official version in 3.2.00.

Skinning is a function that allows multiple rotational deformers to be set on a single ArtMesh to soften and deform it.
This is a simple skinning function that can be used to create soft deformation effects with long hair, swaying strings, and other long, thin ArtMesh.
(Skinning, which allows free deformation like 3D, will be supported in the future.) 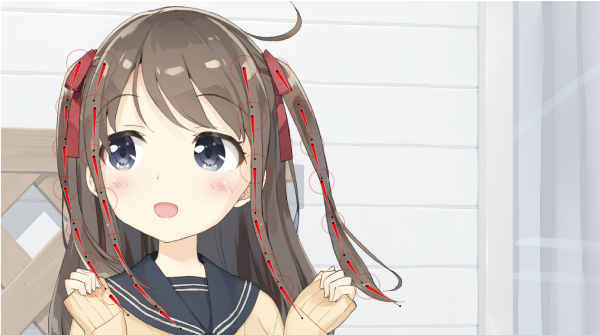 Currently, skinning is used to build deformer parent-child relationships on the target ArtMesh before
We recommend that you applying it.

After skinning, if the parent has a rotational deformer, etc.,
the deformation paths may result in unintended movement in the [Animation Workspace].
It can be controlled by setting the Level edit to 1 and using the rotation deformer, but the parent-child relationship must be established in advance
before skinning.

Notes after skinning is applied

After skinning is set, multiple parameters are automatically generated at the bottom of the palette,
so use the parameter sliders to check hair sway and other movements on the model workspace.
(If you accidentally add a rotation on the view, the keyform will change.)

The skinning mechanism is that when multiple rotational deformers are set on a single ArtMesh,
the ArtMesh is automatically divided at the midpoint between the rotated deformers and is adsorbed with glue.

How to set up skinning

Skinning can be set up in two different ways.

The method of skinning by setting up a deformation path is recommended because the parameters are also generated automatically.

First, select the ArtMesh and use the [Rotation Deformer Creation Tool] to set the rotation deformer.

Then select the ArtMesh for which you want to set skinning and the multiple rotation deformers you have set. 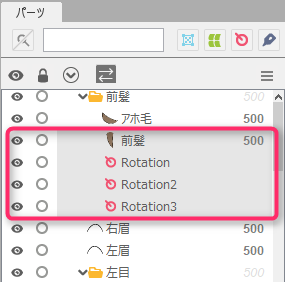 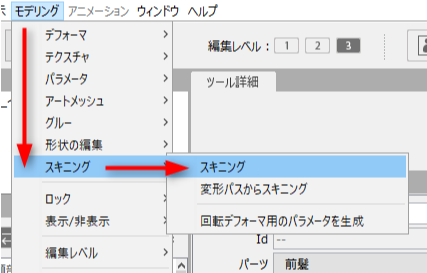 After skinning is set, the ArtMesh and the glue settings that connect the mesh to the ArtMesh are automatically combined into a single part in the [Part] palette. (1)
The original ArtMesh from which the division originated is hidden and remains intact. (2) 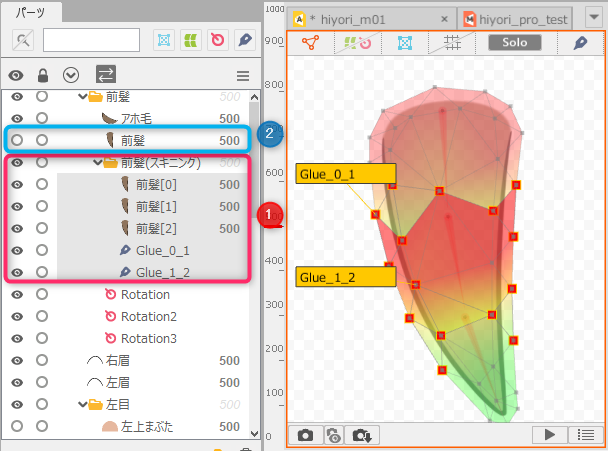 After skinning, move the rotating deformer to check the movement.

Finally, the parameters are set together.
Selects all rotational deformers used for skinning at once. 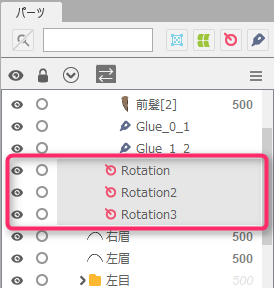 Once you have made your selections, follow the steps below to automatically generate parameters.
In the main menu, choose [Modeling] => [Skinning] => [Generate parameters for rotation deformer] 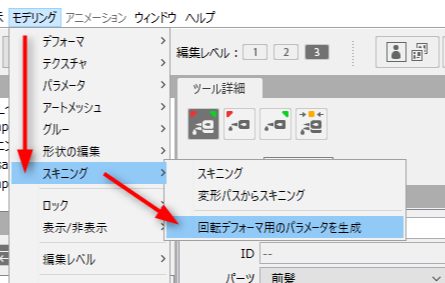 One parameter is generated for each rotation deformer, so set the parameter name and angle range.

After setting, the parameters are automatically generated on the palette in a folder.

POINT
The generated parameters are generated at the bottom of the palette. 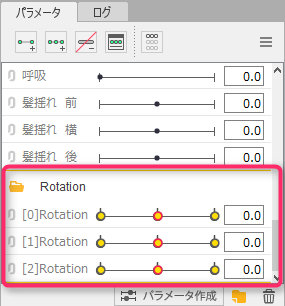 Skinning by setting up a deformation path

A rotational deformer is created starting from the first control point struck.
Therefore, when skinning is used on hair, create a deformation path from root to tip.

After setting up, follow the steps below to set up skinning.
In the main menu [Modeling] => [Skinning] => [Use deformation path for Skinning]. 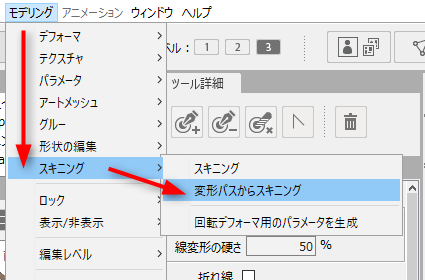 After setting, the deformation path changes to a rotational deformer and is skinned.

After skinning is set, the ArtMesh and the glue settings that connect the mesh to the ArtMesh are automatically combined into a single part in the [Part] palette. (1)
Rotation deformers generated from deformation paths are also combined into a single part and automatically generated on the part. (2)
The original ArtMesh from which the division originated is hidden and remains intact. (3) 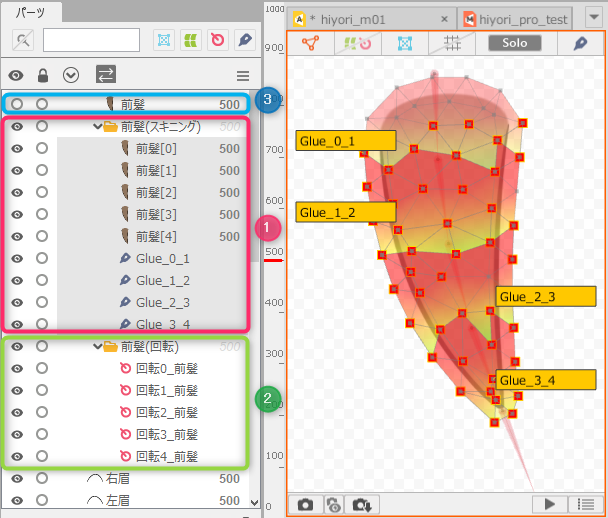 Furthermore, parameters grouped in folders are automatically generated on the palette.

POINT
The generated parameters are generated at the bottom of the palette.

When skinning is generated from a deformed path, the following rules are used to set the parameters. 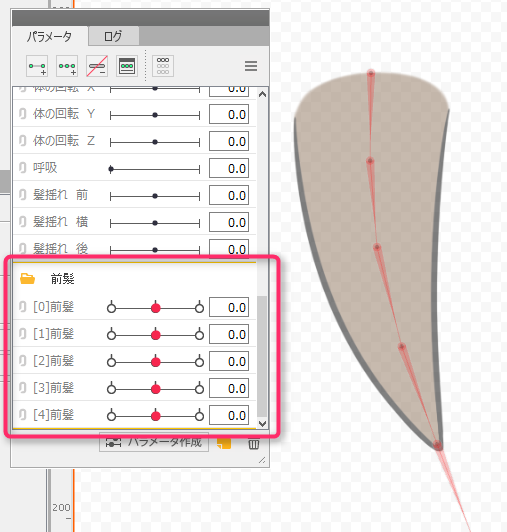 Skinning is set for “long hair” and “swinging strings,” etc., by setting physics operations,
soft shaking can be added in real time as the model moves.

For details, please refer to the “How to Setup Physics” page.

Set the sway directly on the animation view

By switching editing levels in the animation workspace, you can move parameters around in the view.

When skinning is handled in the animation workspace, the “Level edit” settings are as follows:

When skinning is set up with deformable paths, it is possible to animate path manipulations on the view.
For more information, see the Keyframe Insertion section of the Timeline and Dopesheet page.

What to look out for in skinning

If a dialog box appears, press:

A dialog may appear when skinning is applied.
If this is the case, please return to the process with Undo and do one of the following before trying skinning again.

• Fine mesh division of the art mesh.
• Increase the spacing of control points for rotational deformers or deformation paths.

To make good use of skinning: