This section describes a function that automatically inverts key forms and reflects them in the parameters.
By utilizing this feature, you will be able to accurately create the deformer's left-right inverted shape.
Since the key form is completed by simply making the shape on one side, the work can be greatly reduced in time.

Furthermore, motion inversion can be applied to asymmetrical ArtMeshes.

TIPS
Motion inversion is a function that inverts and burns in key forms.
It does not always reflect the movement as mirrored, so once you have adjusted the shape, follow the steps again to apply the movement.

Here, as an example, we will add movement to the [Angle X] parameter. 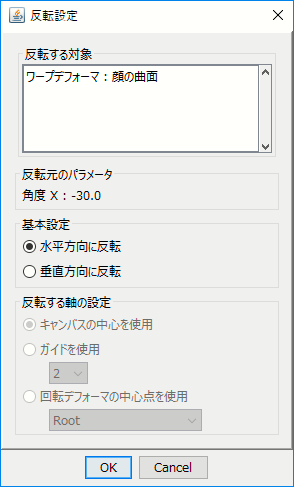 When the color of the parameter changes and a red circle gradient appears at the destination of the reversal of the movement, you are done.
The movement on the other side is automatically generated, so move the parameters to check it. 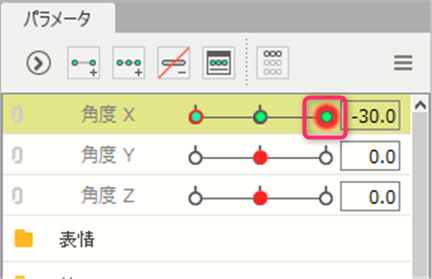 The same procedure can be used to create a vertical motion reversal.
However, be careful to check the [Flip Vertically] checkbox in the [Flip Settings] dialog.

It can be applied not only to warp deformers, but also to the position of the axis and angle of rotation of rotational deformers.

The same [Motion Inversion] can be applied to ArtMeshes as to deformers.
The procedure for using this function is the same, but if you want to invert the motion in the ArtMesh, you will need to [set the axis to be inverted], which is described below.

Setting the axis to be inverted

Using the center of the canvas:

Specify the No. of the guide to be the reference axis for reversal of the movement.
For more information on guides, see “Guide Functions”.

Using the center point of the rotational deformer:

The center point of the specified rotation deformer is used as the reference axis for motion reversal.

Caution when executing on multiple objects

The following warnings may appear when performing [Reflect Motion] on multiple objects.

When multiple objects are selected, the same parameters are applied to all objects that have parent-child relationships.
Since the movement may not be as intended, check the movement after applying the following warning when it appears.

Motion inversion is applied to the deformer and ArtMesh, starting with the parent.

The deformation result is held as a key form of parameter for each object.
Therefore, the following cases where the parent does not have an inverted shape may result in deformations that differ from the expected results.