Performance when working with models in the SDK

When displaying models on the SDK, performance may be degraded depending on the order in which ArtMeshes are drawn.
Cubism models are drawn one ArtMesh at a time from the back (canvas side).
As you draw an ArtMesh on the screen, if it has different drawing settings than the ArtMesh you drew just before, it will perform poorly on the SDK.
Settings where switching will degrade performance are as follows.

These factors will affect each other.
Clipping switches settings even if the texture, drawing mode, and ArtMesh that serves as the mask are the same.

For example, suppose a model with two textures and some ArtMeshes are placed in the following order from the back. 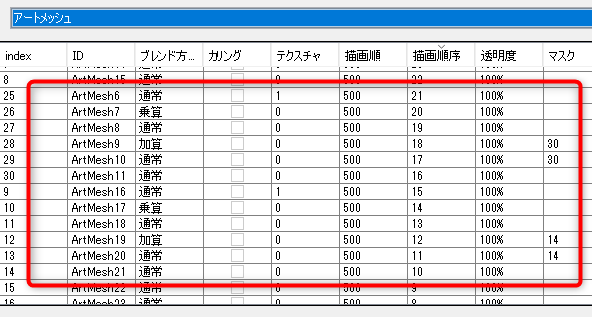 If this drawing order is rearranged as follows, the number of times the drawing setting is switched is reduced to seven times. 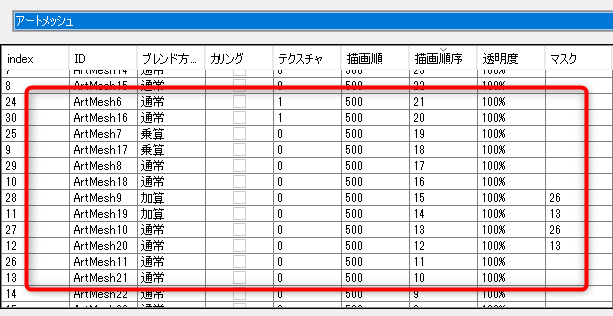 The order and switching status of ArtMesh can be checked in Cubism Viewer for OW.
If you set up a deformation in which the order of drawing changes depending on the parameters, it becomes difficult to predict the number of times it will switch.

Also, be careful not to use too many of the following objects or too many settings for each status, as it will affect performance on the SDK.

Of these, 6 has a particularly large impact, and it is basically recommended that up to two settings be used.
This is because the amount of blending computation between the key forms of the parameters increases with multiplication.
-> Reference: Key Forms (parent-child relationship movement)

For example, if two parameters are set for one ArtMesh, a blend calculation is performed for each parameter, and then the results of each calculation are further blended together.
Therefore, the more parameters set, the more blending calculations are required.

Please note that when dealing with extended interpolation in the SDK, there is little impact on performance during execution, but there is a slowdown when loading the model.