Create a configuration file in json format to reflect the arm switching mechanism created in the model and motion.

[Note when setting a pose]
The curves in the “Live2D Parts Visibility” property in the animation data must be set to Step.
(Default is set to step.)
-> About Steps

If other curves are set, there is a possibility of unintended movement.

The list of part IDs that can be seen by clicking on pose.json are all the part IDs created by cmo3.
Even if you are creating a decimated number of moc3s for different outfits, you can create a single pose setup file that can be used in common.

Find the arm part ID and set the group number (group No.).

Parts belonging to the same group number will only be displayed one by that group.

The arms in the sample are made with separate parts for the left arm and the right arm, but
for a simple configuration where parts are made for each set of arms, set up as follows.

Once the settings are made, load and play back the motion corresponding to the arm changeover.
If the setting is successful, the arms will switch.

See “Creating Motion with Pose Transitions” for instructions on how to set up motion for arm transitions on the animator. 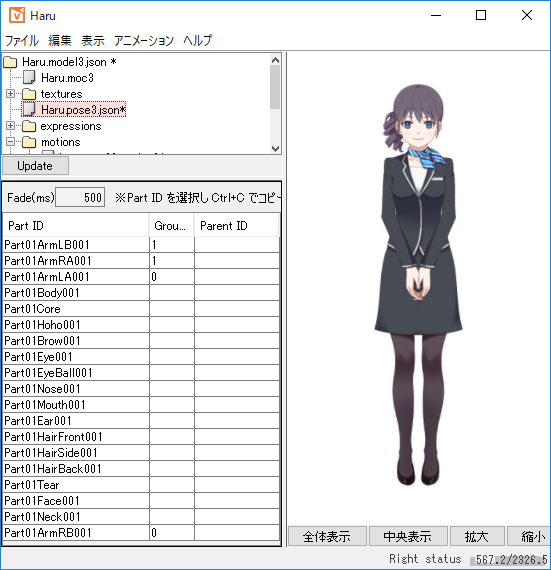 Set “parent ID” for the arm parts of other outfits other than the arm parts you set to show or hide in motion to create a parent-child relationship.

Arm parts with a parent set in the parent ID field will have the same switching behavior as their parent parts.

For the simple configuration described earlier, where parts are made for each set of arms, set up as follows.

TIPS
Select the part ID you wish to set as the parent and press the “Ctrl” and “C” keys simultaneously to copy the text of the ID. 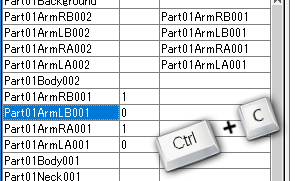 TIPS
If you wish to register multiple parent IDs, first consider whether parent-child reversal is possible.
It may be possible to represent it in Viewer by swapping the parent and child.

At this time, set the number of the child's pose setting to be smaller.
In the Framework for processing poses, the calculation is performed starting with the lowest number.

The “Fade(ms)” slider allows you to set the fade time for switching poses.
The default value is 500.

You can export a JSON settings file by clicking on the [File] menu -> [Export] -> [Pose Settings]. 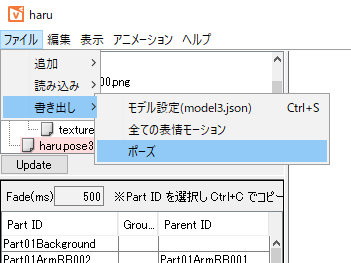