Parts, deformers, and ArtMeshes can be easily copied and pasted.
In addition, the parameters associated with the shape are copied together so that similar shapes can be duplicated.
It is an efficient way to work.

POINT
Glue can now be copied and pasted, but please note that the glue itself can also be selected from the parts palette.

Click Ctrl+C to copy the right arm of “hiyori”.

POINT
Until Cubism 2.1, copying a parent deformer by itself automatically copied the deformers of its children, but
starting with Cubism3, deformers can be selected by themselves. (Change specifications)

Next, select the “haru” model file and paste it using Ctrl+V. 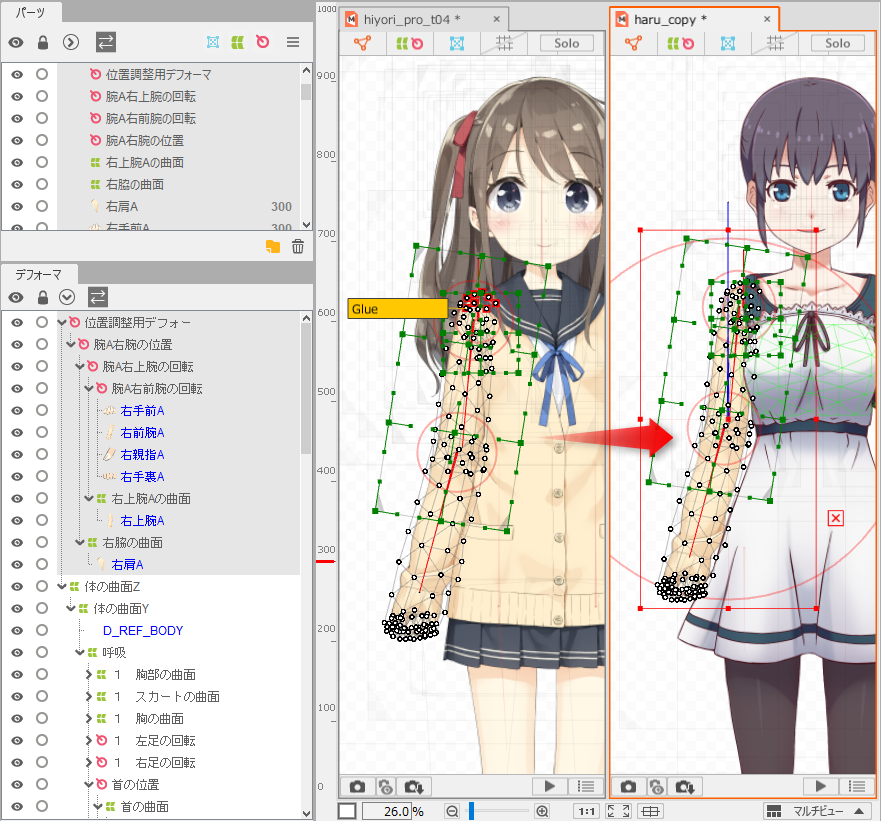 A positioning deformer is automatically inserted into the pasted file, if necessary.
Deformers for positioning allow objects with assigned parameters to be easily moved, scaled, and rotated together.
This improves convenience with respect to post-copy-paste operations.

However, the deformer for positioning is only created temporarily and should be deleted once the position is determined.

Then, drag the “Arm A right arm position” that was the child of the position adjustment deformer on the deformer palette and
drop it on the rotational deformer “position XZ of right arm A”.

This has created a new parent-child relationship for the new right arm, which also works with parameters such as “body rotation” and “breathing”.

About textures when copy-pasting

When copy-pasting parts or objects between different models, the increased objects are placed as new textures.
In addition, the added texture will be positioned while preserving the original texture position. (* 3.3 new feature)