Click the button below to use the Deform Path edit.

With the ArtMesh you want to move selected, click the (1) [Deform Path] button to switch the display of (2) [Tool Details] palette
and you can edit the Deform Path. 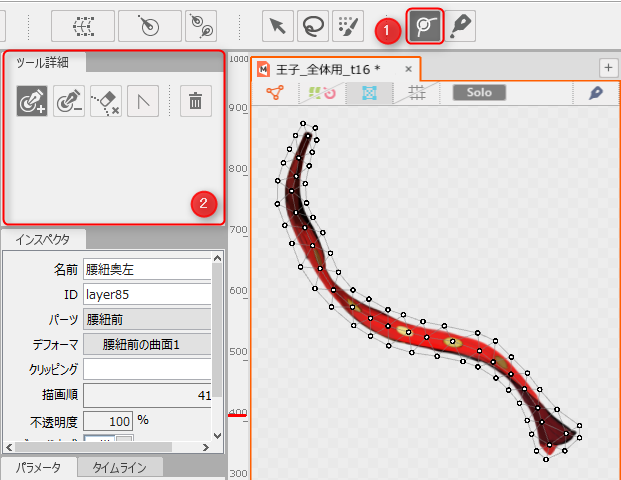 Make sure the [Add control point] button is selected in the (2) [Tool Details] palette.

Clicking on the canvas in this state will place a control point (green dot).

Place control points along the flow of the ArtMesh.
Instead of dragging, click as you set up. 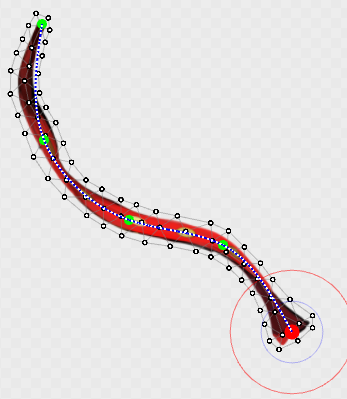 To correct the position, directly drag and move the control point.
If you are in edit mode for a deformed path, moving a control point will not deform the ArtMesh.

For other sub-tools, see “Tool Details”.

In Transform Path mode, you can only edit control points. When you are done, click the [Arrow tool] icon on the toolbar to switch modes.

Move the control points to deform the ArtMesh. 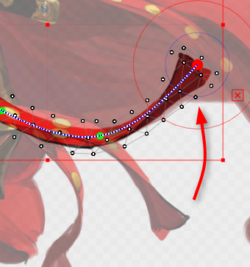 When deforming, you can change the degree of influence between ArtMeshes in the [Inspector].
This prevents the ArtMesh from turning over and allows it to deform gently while maintaining some spacing.
On the other hand, if you want to create the effect of turning the cloth inside out, set the [Deform Path width] to a smaller value.

For a gradual deformation while maintaining spacing:

Increasing the width value of the line transformation increases the size of the red circle around the control point.
Inside the circle, the mesh vertices interact with each other and deform gently as they try to maintain their shape. 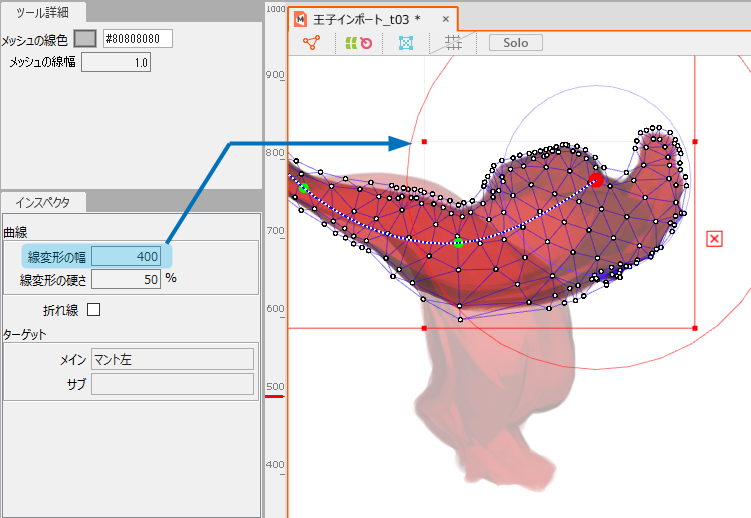 If you want to make a large transformation, such as flipping over:

Decreasing the value of the Deform Path width will reduce the size of the red circle around the control point.
The loss of influence between the vertices of the mesh causes it to flip over and deform significantly. 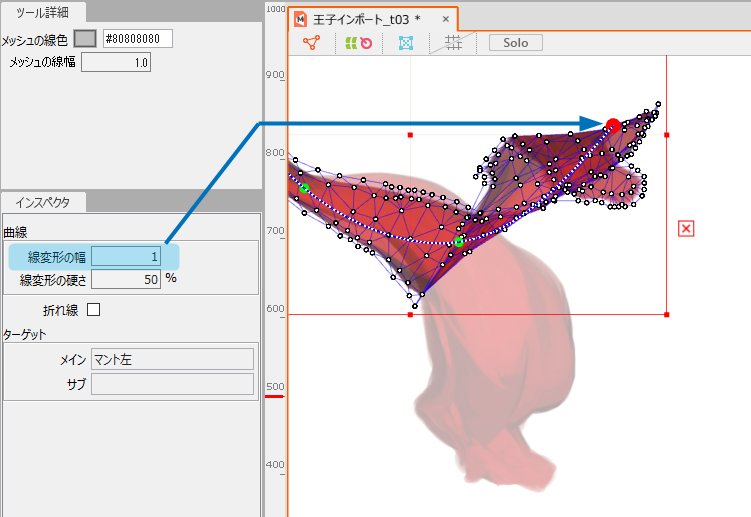 Adjustment of hardness of line deformation 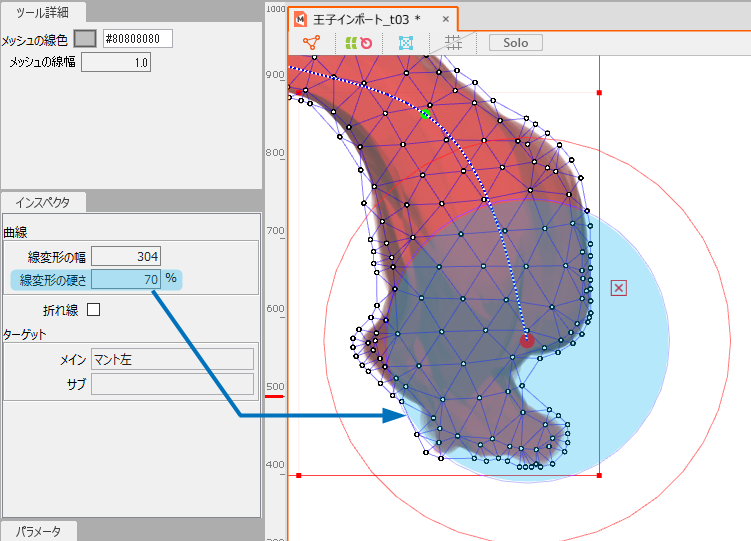 If you want the mesh to maintain its shape: 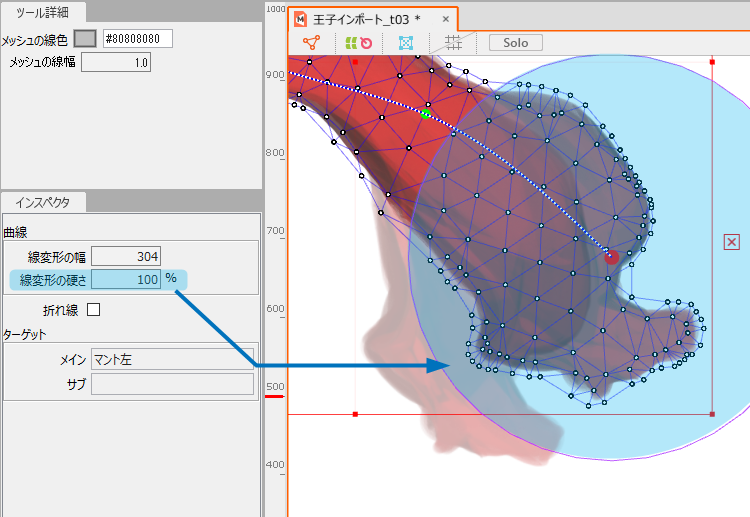 If you want to deform the shape of the mesh significantly:

When the hardness value of the line deformation is set to 0%, the blue circle becomes smaller toward the center.
In this way, the degree of influence is eliminated and the deformation becomes large as it is. 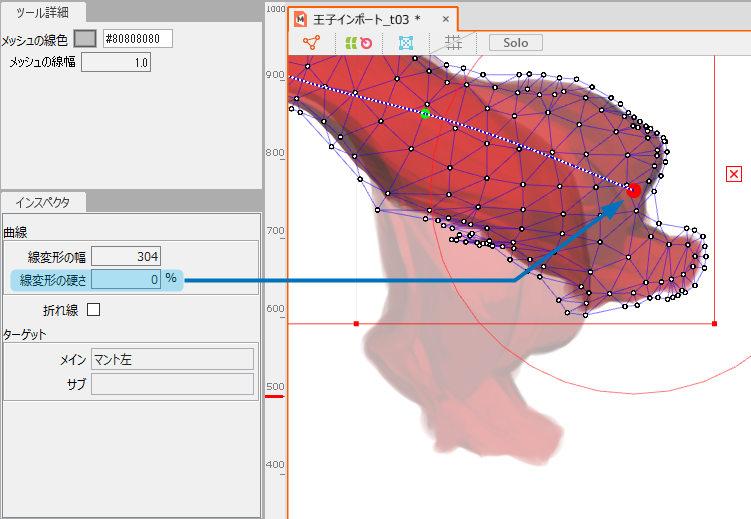 Multiple ArtMeshes can be moved together in a single deformation path.

Multiple deformation paths for an ArtMesh

Multiple transformation paths can be set for a single ArtMesh or for more than one ArtMesh.

Here are some ways to reduce silhouette collapse when there are areas that you do not want to move.

Below are examples of cases where the silhouette has been destroyed.
In the image, two ArtMesh closures were tried to be moved together in one deformation path,
resulting in a broken silhouette.

By placing another deformation path in the area you do not want to move, you can deform the silhouette without destroying it, as shown below.

Deformation paths can be edited by switching between three levels of editing.
The default Level edit is [2].

Level edit [2] and [3] allow the creation of different deformation paths for the same ArtMesh.

This is a useful feature and we encourage you to use it.

This mode allows editing of ArtMesh only.
Deformation paths are hidden, allowing for fine-tuning.

This mode displays deformation paths.
The default is Level edit [2].