Before importing PSDs, make sure the data is suitable for import.
For details, please refer to the “About Material Separation” page.

If you have trouble importing, please refer to the “Notes on PSD Creation” page.

In Cubism Editor, you can create a group (folder) hierarchy in the parts palette, just like in Photoshop.
Eyelashes, which tend to have a large number of objects, and arms with multiple patterns can be imported as they are stored in groups.
(Layers not stored in groups can also be imported.)
The original drawing required as a rough sketch can also be included in the PSD.

Groups can be multi-tiered, but the lowest layer in each group is ultimately imported as the “texture”.
Therefore, line drawing layers and fill layers, etc. must be combined in advance.

Drag and drop the PSD into the view area of the model workspace.
* You can also import a PSD by opening it from the [File] menu -> [Open]. 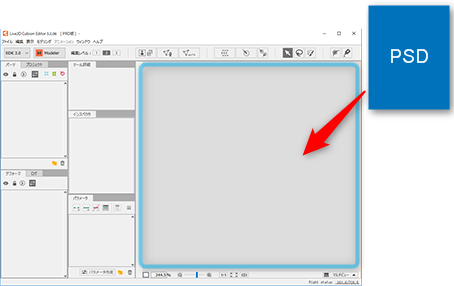 The PSD layer was automatically converted to an ArtMesh and placed on the canvas. 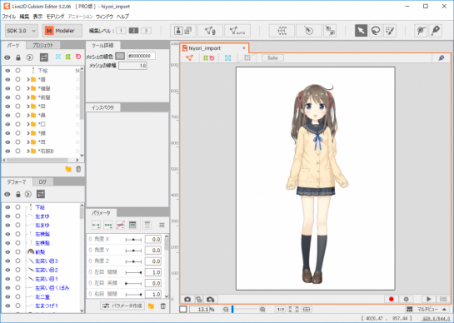 Upon placement, an ArtMesh is created with a minimal number of vertices.
This helps to reduce data volume by reducing the allocation of unnecessarily fine meshes, even to textures that are rarely deformed. 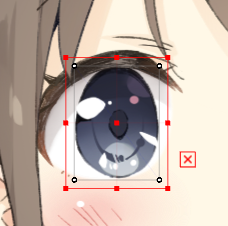 After confirming that the PSD has been imported successfully, the next step is to edit the mesh in detail.
See “Mesh edit” for more information.

• Starting from Cubism 3, parts are placed in the parts palette in the same order as the PSD layers.
• Layers (groups) that are hidden in PSD are also imported.
• “Polygon assignment” in Cubism 2.1 and earlier is now “mesh assignment” in Cubism 3 and later, and is performed automatically upon PSD import.
• When Cubism 2.1 model data is loaded, the order of parts is forced to be reversed.

If the size of the PSD to be loaded is too large, a [Confirm] dialog box will appear.
We recommend previewing the image at 1/2 the original size, as working with the image displayed at full size may result in slow operation.
The quality of images for modeling is not affected.

Even after the image has been loaded, it can be changed from the [Show] menu -> [Show Quality (Image Display for Models)]. 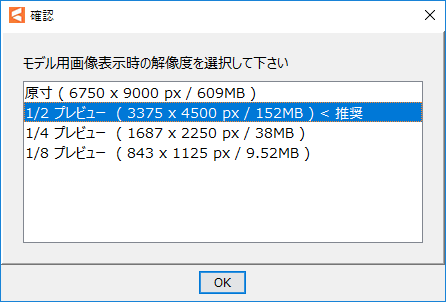 When a PSD is imported into an editor that already has a PSD imported, the following [Model Settings] dialog box will appear. 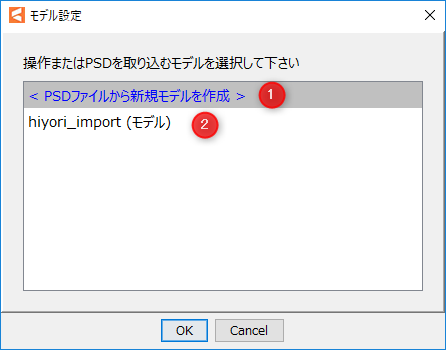 If you select (2), an additional [Re-import Settings] dialog box will appear. 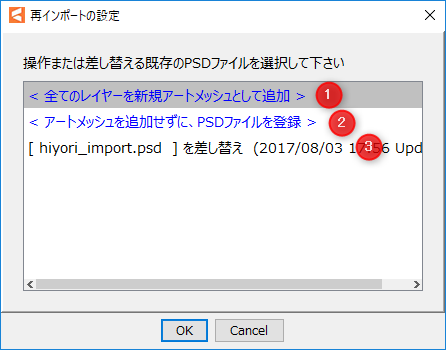 Replacing a PSD that has already been imported is called “reimporting”.
See the “Reimporting PSDs” tribute for detailed instructions on re-importing.