Target version selection can be done in the model and animation files.

Selecting the target version of the model allows you to create in a display environment tailored to the SDK that is intended for embedding.
When a new function is added or a function cannot be expressed in the output destination, the function is displayed in a restricted state.

With regard to the target version selection for animation, the functionality is also limited to what can be expressed in the intended use.

Target version selection is not a function for converting cmo3, can3, or cmp3 files to past versions.
cmo3, can3, and cmp3 files are backward compatible.

Please note the following items, as older files can be used with newer versions, but the reverse is not supported.

When an animation file is loaded, a dialog box for selecting the target version is displayed for the first time.
This setting is saved in each individual animation file as the default setting when creating a new scene.

This setting can be changed later. 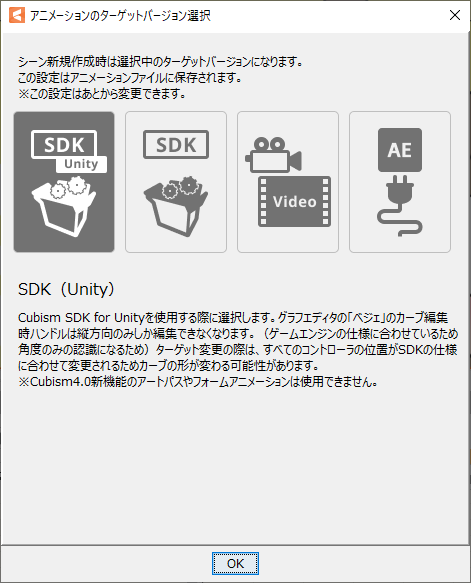 [Video] is recommended if you plan to export videos as images, without exporting files for embedding or other purposes.
However, when using the AE plug-in, you will need to export a file for embedding, so please select [AE Plug-in].

If a CAN3 created prior to 3.0 is loaded, an item titled [Existing scenes also match default settings] will appear in the dialog.
Checking the box allows you to apply the selected target version to an existing scene. 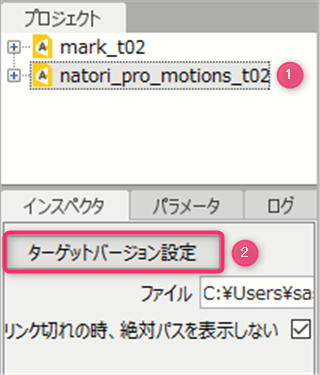 Set target versions for each scene

The target version can be set for each scene.
To make changes, select the target scene (1) and make changes from the inspector palette (2).

Each target version of the model is loaded with its saved version.
When creating a new file, the version of the editor you are using is automatically selected.

The target version can be changed from the [Select Target Version] in the upper left corner of the editor.

From the pull-down menu, select the version you wish to change. 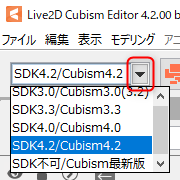 The details dialog will be displayed. After confirming the contents, click [OK]. 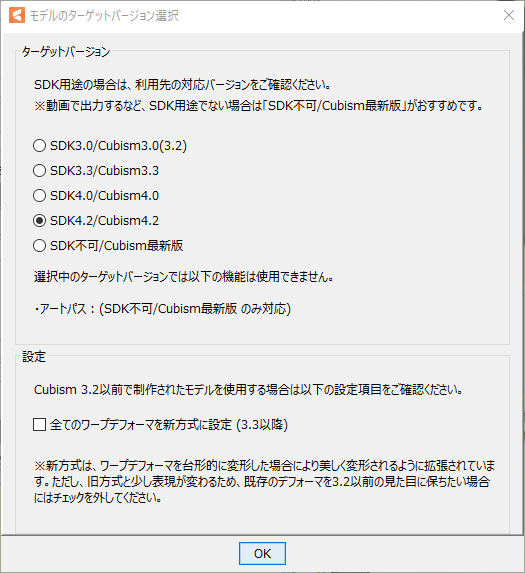 If you are not exporting data for embedding, but are exporting video as a movie, [SDK(N/A)/Latest Cubism] is recommended.