Using the “deformer” described in Adding Body Movement, we will add the [Angle X] and [Angle Y] movements that turn the face up, down, left, and right.
This section explains how to add deformers and how to add movement. 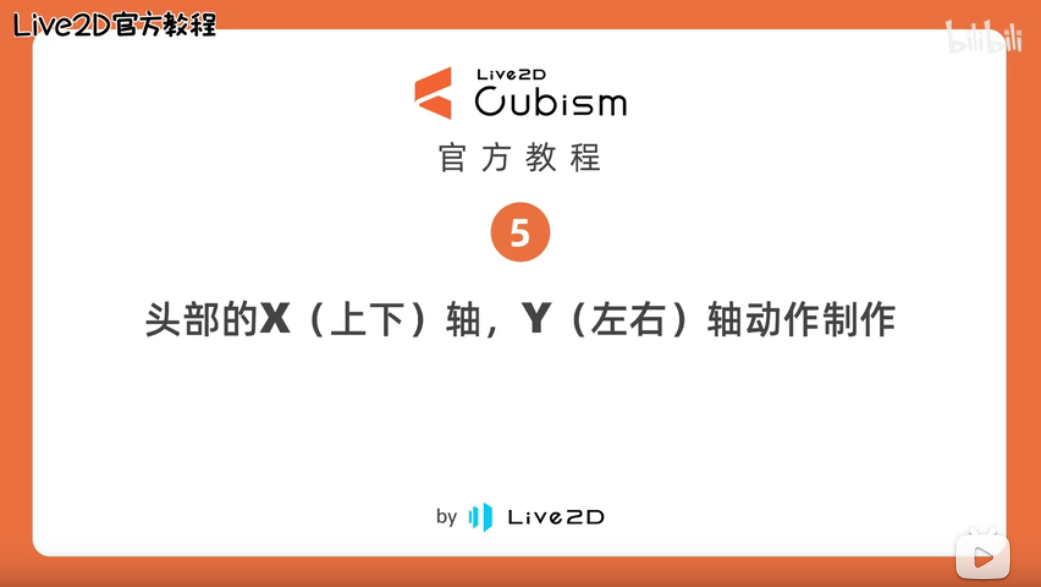 Here, we will add an [Angle X] [Angle Y] movement that turns the face up, down, left, and right.
Once the face is understood, the body can be moved in the same way. 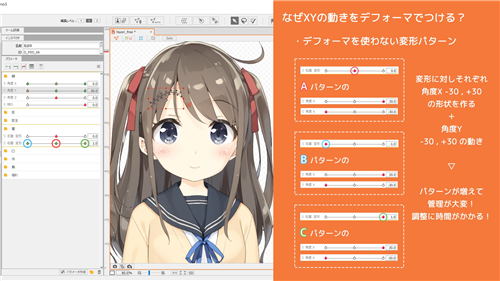 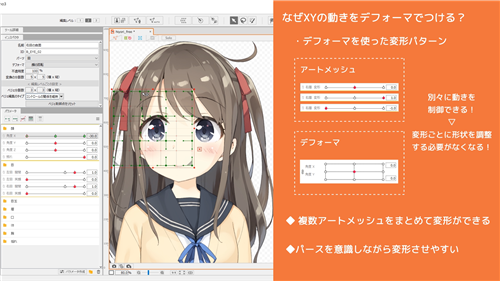 Deformers may seem difficult, such as parent-child relationships, but they should be used effectively.

While it is possible to put the entire face in one deformer, it is better to make each part individually to create parallax and deform it three-dimensionally.
It is also recommended to make individual deformers for each part as it makes it easier to adjust details.

The method for creating a deformer is the same as described in the previous tutorial.
Select the ArtMesh you want to include and create a deformer. Warp deformers are used in XY.
The contour deformer should be made so that the number of bezier divisions is 2 x 3. 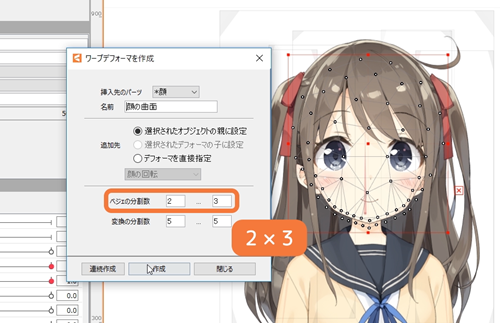 About the number of Bezier divisions

The number of bezier divisions is recommended to be 2 x 3 for long verticals, 3 x 2 for wide widths, and 2 x 2 or 3 x 3 for equal aspect ratios, using these four basic ways. 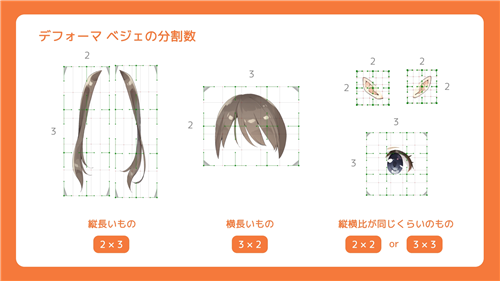 If you wish to change the number of bezier divisions, you can do so from the inspector palette.
You can increase or decrease the value here, or change it at will. 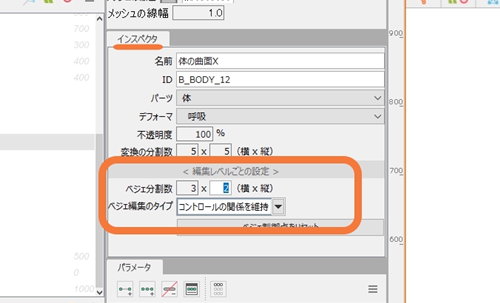 From the parts palette, it is easier to create a deformer by locking the parts that are not selected.

The eyes are made deformers separately for the left and right eye.
Select the lashes, eyeballs, and whites of one eye together.
You can select from the parts palette, but if you have locked all the parts except the eyes, you can select them all together by dragging them on the canvas. 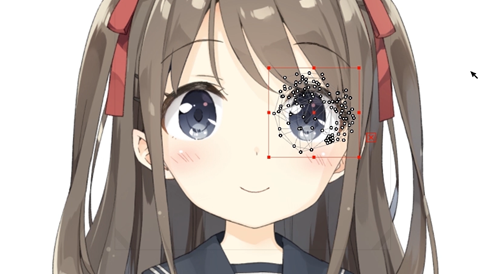 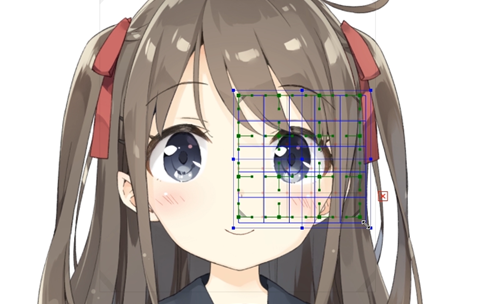 It is easier to deform if the four inner control points surround the eye. 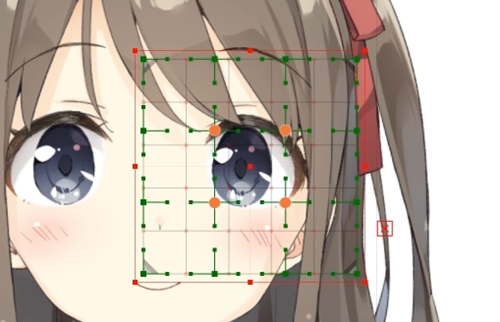 Make a deformer for the other eye as well. 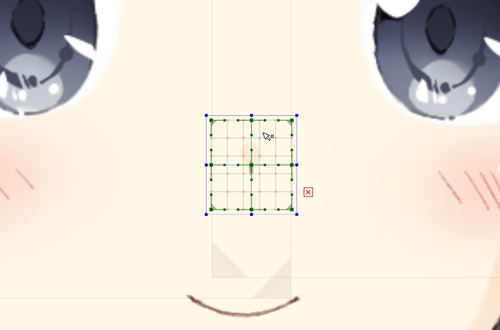 Creating a deformer of the mouth

Create a deformer with 3 x 2 Bezier divisions.
It is easier to deform if the control points are placed so that they are at the corners of the mouth. 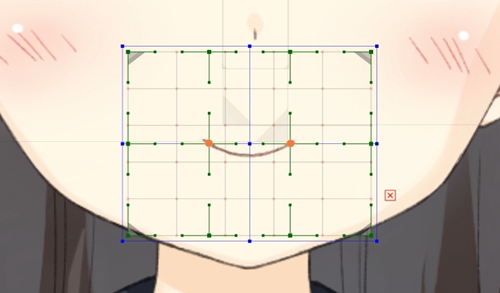 Creating a deformer of the eyebrows

A 2 x 2 number of Bezier divisions is recommended. As with the eyes, make them separately on the left and right sides.
It is easier to deform the eyebrows if the middle control point is in the middle of the brow line. 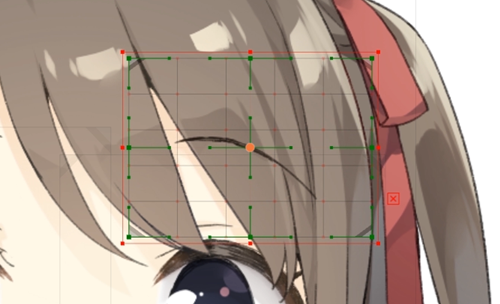 Make deformers on the ears as well. As with the eyes and eyebrows, they are made separately on each side.
The number of Bezier divisions should be 2 x 2.
Deformers should be positioned in such a way that the parts are centered. 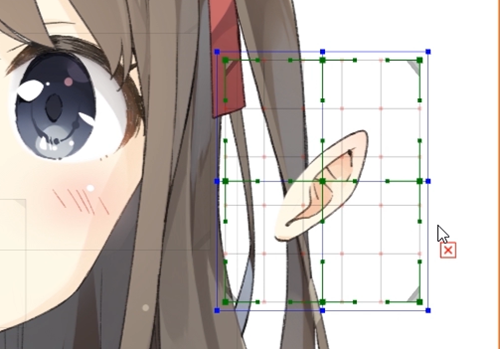 The other side is deformed in the same way.

For the hair, make a deformer on top of the swaying deformer you made last time. 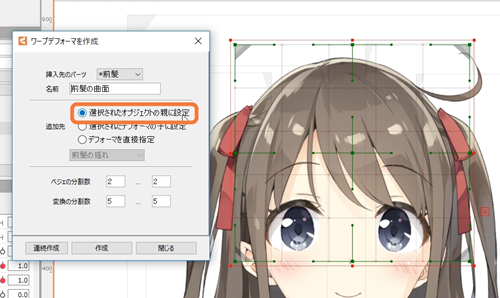 When creating a deformer, be careful that the parent deformer is not smaller than the child deformer.

Create a deformer in each of the front, left and right side, and back hair. The number of bezier divisions depends on the length of the hair.
It is recommended to use 2 x 3 if long or 2 x 2 if short. This time, only the bangs are made in 2x2 and the rest in 2x3.

This is basically the end of the deformer for XY.
Looking at the deformer palette, a deformer is created for each part in the face rotation.
If there are parts that were omitted from being made, or if there are character-specific parts such as ribbons, make deformers for those parts as well. 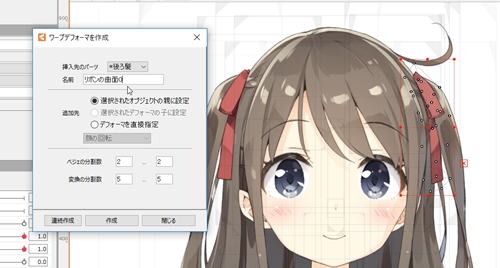 Select the deformer you created and add three points to the [Angle X] parameter.
Since it is difficult to create the shape with all the parts displayed, hide the other head parts and use only the outline. 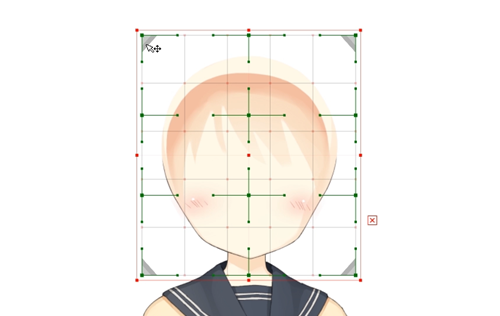 Select a contour deformer, move it slightly to the side, and shape it.

When creating the shape, do not look too much at the shape of the parts themselves, but deform the deformer handles with the perspective in mind to create a beautiful shape.
Once the deformation is applied so that the back side is slightly narrower and the front side is wider, the rest can be fine-tuned to the desired shape. 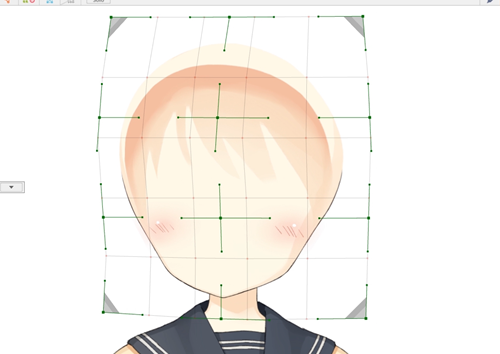 Make the movement to face the right side of the screen in the same way.

The nose, mouth, eyebrows, eyes, ears, and hair deformers will be moved in the same way.
The trick to deformation that is common to all is to deform the deformer with an awareness of perspective so that it is slightly thinner in the back and wider in the front. 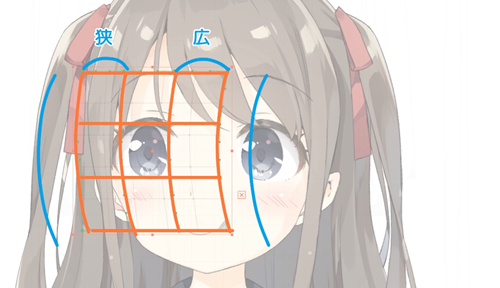 The trick is not to make adjustments by looking only at the resulting horizontal shape, but also by watching the movement of the deformation when the parameters are moved.

The movement in the Y direction is added using the same deformer used to add the X movement.
Select the deformer and choose the [Angle Y] parameter to insert three points.

As with X, the display is made to move with only the outline.
The movement is similar to the X, deforming the deformer while keeping the perspective in mind, so that the back is narrower and the front is wider.
Also, in the case of Y, it is best to let the deformation be such that the back side narrows a little. 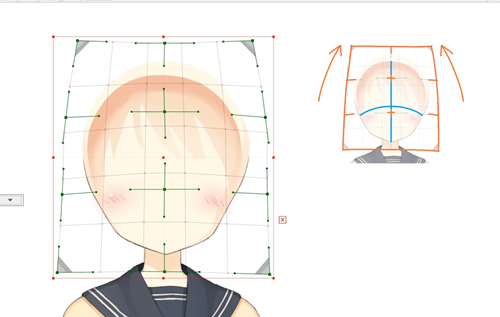 Let's make the other parts move in the same way.

When you click on the Angle X parameter, a small pop-up appears beside it.
Hover your mouse over the far right to see the parameter adjustments, and click [Choose] at the top to select all objects with that parameter. 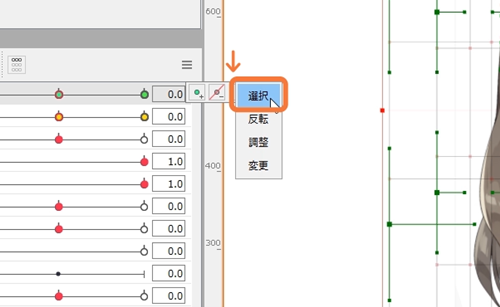 With the selection made, click on [Auto Generate 4 Corners] from the menu next to the parameter. 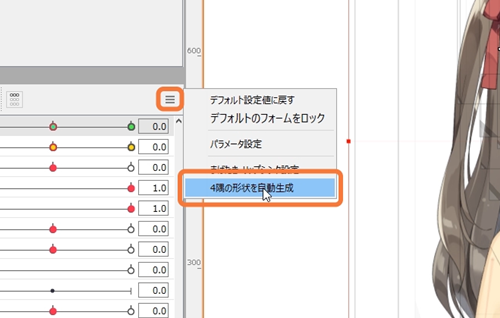 You will then see a dialog box like this.
Confirm that [Angle X] is entered in [Parameter 1] and [Angle Y] in [Parameter 2].
In addition, make sure that the option Target is set to [Selected Objects] and press OK. 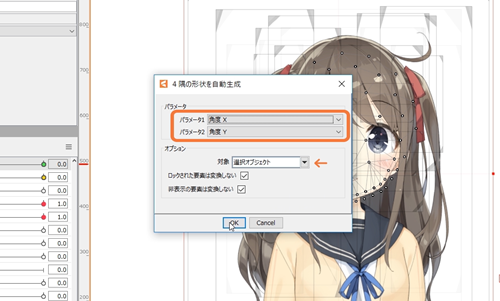 Now a diagonal face has been created.
Click the chain icon to the left of the [Angle X] parameter to merge it with the parameter below.

Facial deformations can be easily checked in this state.
Move the parameters around and adjust any unnatural parts. 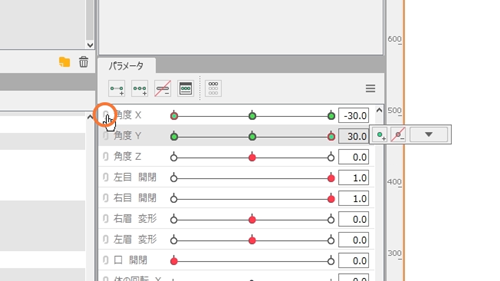 This is the end of this motion attaching.
As for [body rotation X], it can be created by adding a deformer, similar to that of a face. 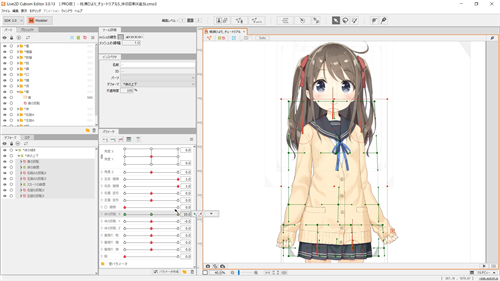 You will get a better understanding of how the deformer actually works, as well as other areas that are not explained, by looking at sample models.
Also, if you have any questions about a function, please refer to the manual site for a detailed explanation of each function.