In this case, we will use the Live2D “Deformer” tool to add movement to the body and hair.
In the video, we explain how to use Deformer while adding [facial tilt], [hair swing], [arm movement], and [body up/down and tilt].

Below is a link to a manual with more detailed explanations in the video. 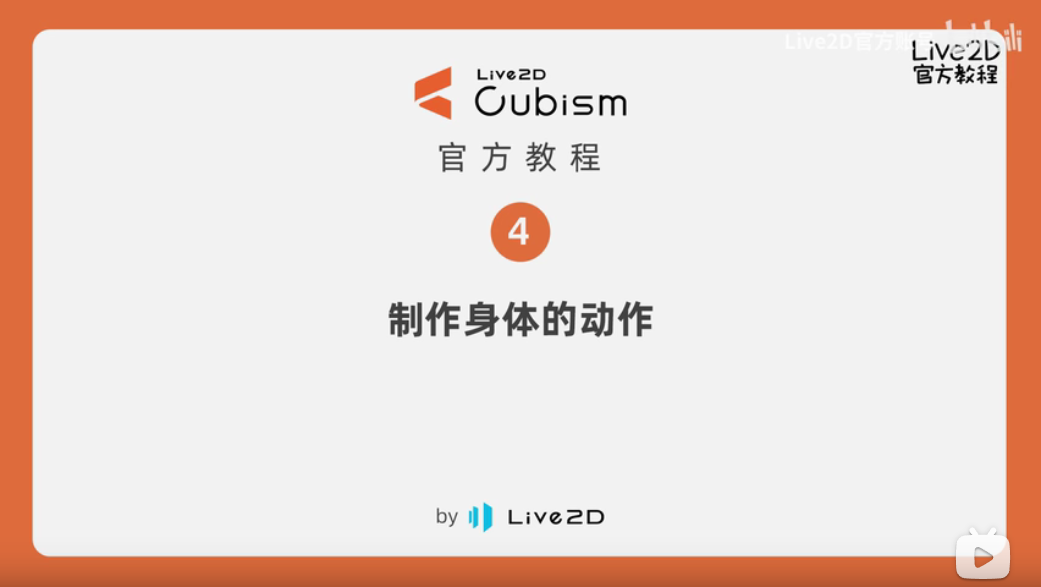 You can download the data with the movements created in the video here. Please refer to.
* Please be sure to read the license agreement for the free materials before downloading.
The completed sample model of “Hiyori Momose” appearing in the video => Click here for DL
* Some browsers may not allow you to download the file even if you click the link.
In that case, please right-click and save the link.

Here, the ArtMesh is placed in a “deformer” to add movement.
The movement to attach:
• Tilting movement of the face
• Hair swing
• Arm movement
• Tilt of the body and vertical movement
The above four.

When the sample model is displayed, it shows a gray square and several red bars.
This is deforma. 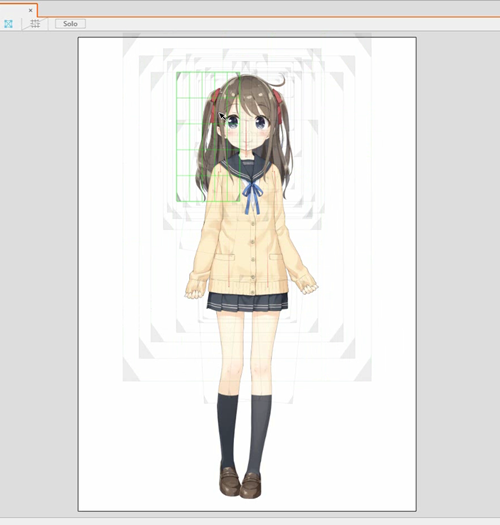 Deformers can be deformed and rotated by placing an ArtMesh inside.
Like ArtMeshes, deformers can be parameterized, so if you learn how to use them, you can add a variety of movements to your characters.

The red bar is called the “rotational deformer”.
The Rotation deformer is a deformer specialized for rotational movements, allowing the user to rotate by specifying a numerical angle.
It is primarily used on the neck, arms, and legs to create a leaning motion. 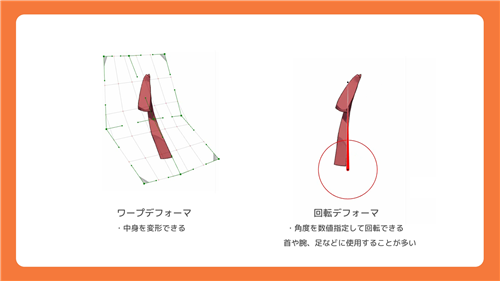 The tilting motion of the face is named [Angle Z] in the Live2D parameters.

First, the head component is placed in a rotating deformer.
From the parts palette, lock in the neck, arms, body, and legs. 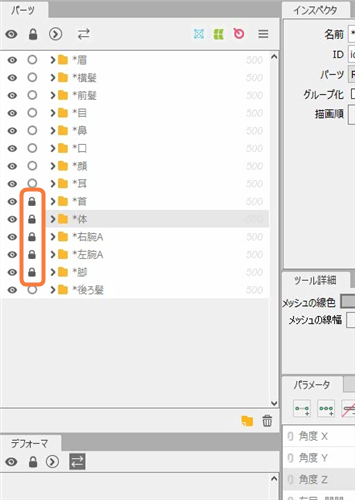 Once locked, use Ctrl+A to select all ArtMeshes that are not locked.
With the selection selected, click [Create Rotation Deformer] at the top of the screen. 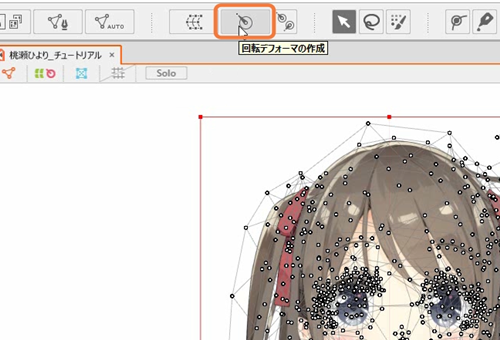 Clicking on [Create Rotation Deformer] will bring up a new dialog box.
The name can be arbitrary.
You can decide where to insert the parts at the insertion point. This time, select a face since it is a face rotation.
Be sure to select “Set as Parent of Selected Object” as the destination for the addition. 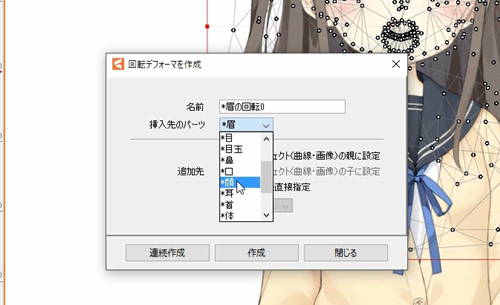 The rotating deformer is now ready.
When rotated, the selected face parts will rotate.
If any parts are missing, they can be inserted by selecting the ArtMesh and then selecting Deformer from the inspector.

Deformers can be positioned by holding down Ctrl and moving them. This operation is similar for warp deformers.
Be careful not to hold down Ctrl, otherwise the ArtMesh inside will move with it. 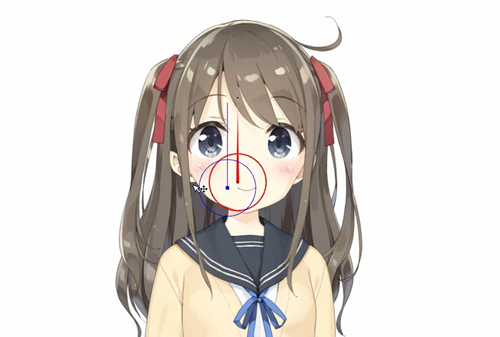 The rotating deformer is brought to the chin position. 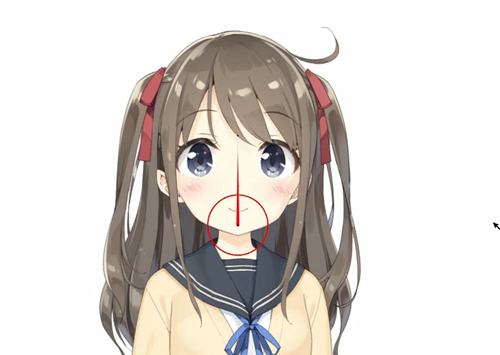 Once the position has been adjusted, the parameters are used to add movement.
The procedure for attaching parameters is the same as for an ArtMesh.
The three-point insertion is used to add motion to the face rotation Z parameter. Here, each side should move 10 degrees. 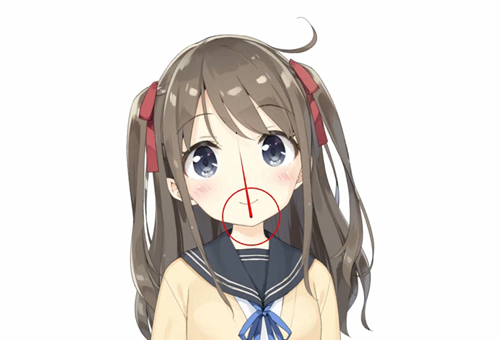 Next, let's create a hair swing movement. Movement is applied to the front, sides, and back of the hair, respectively.
First select the forelock ArtMesh and click on [Create Warp Deformer] in the center of the menu above. 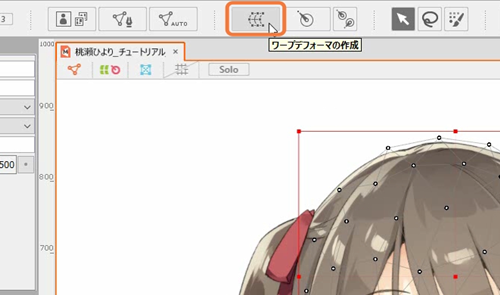 As with the rotational deformer, a dialog box will appear to confirm each item.

The bottom item is one that was not present during the rotational deformer.
For the time being, the number of Bezier divisions is 2 x 2 and the number of transformations is 5 x 5.
When you have finished entering the values, click [Create]. 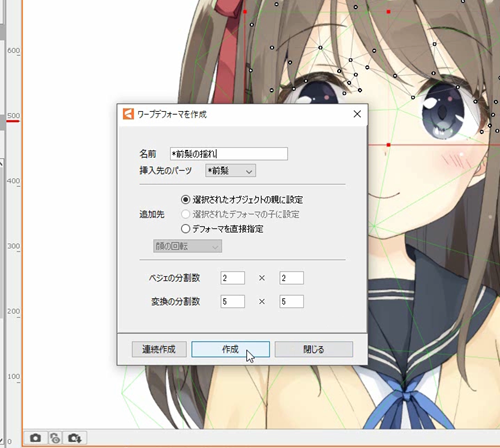 The warp deformer is ready.
When the deformer is deformed, the bangs are deformed together.

Now, let's add a swinging movement of bangs to the deformer. 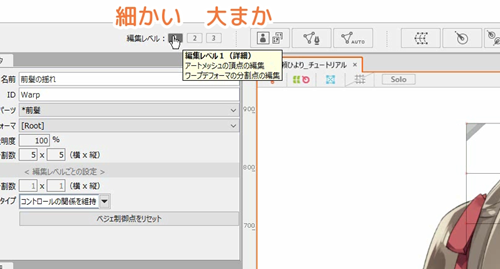 The swaying motion can be easily added by simply moving the bottom of the deformer. 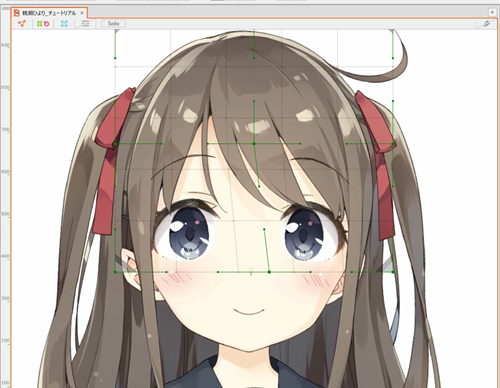 This completes the swing of the bangs.
Create deformers and movement in the sides and back of the hair as well.

As with the face, select the ArtMesh and then create a rotational deformer on the arms.
However, if this is left as is, the arms are down but the rotating deformer is pointing up, making it difficult to operate, so the default angle is set to match the arms.
The angle can be adjusted by turning the handle while pressing Ctrl. 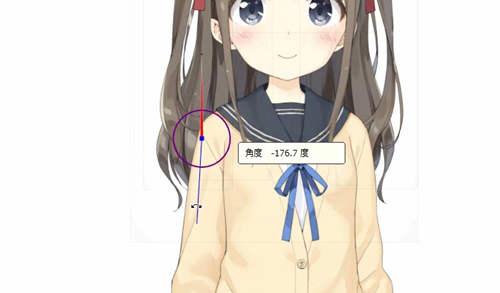 After adjusting the angle, click [Freeze Rotation] in the inspector to set the reference angle.
Setting a reference angle makes it easier to specify the angle numerically. 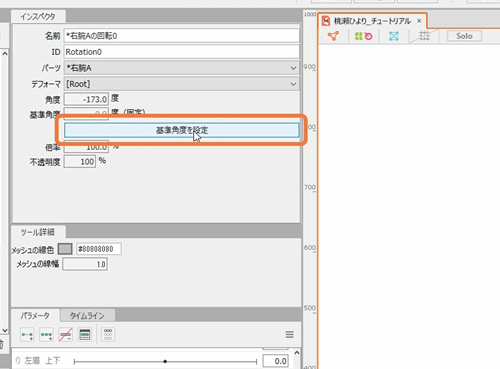 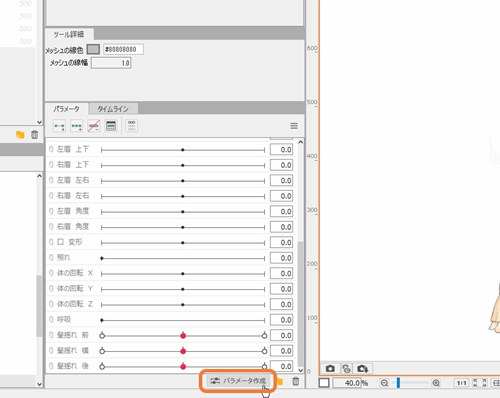 The name should be “Arm” and the ID “ParamArm”. 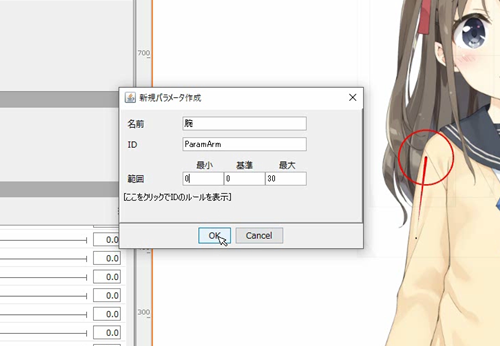 Insert two parameters into the rotational deformer to make it go up when it reaches 30. 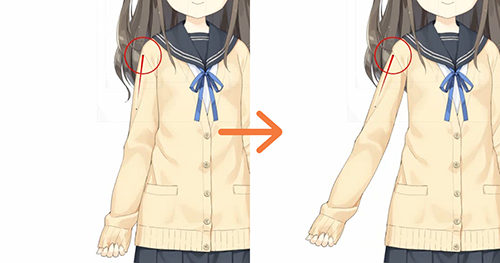 The arms looked thin when raised, so this time we also added a parameter to the ArtMesh to adjust the thickness.

The left arm is moved in the same manner.

Tilting and up-and-down movements of the body are made by placing the entire body in warp deformer.
The procedure so far is to select all ArtMeshes and create a deformer, but since the head, hair, etc. are already in the deformer, I am unable to set them as the parent and create them. 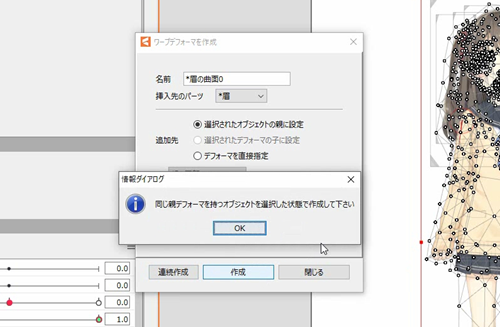 For this reason, we will first create an empty deformer and then insert the object.

Two deformers are also required, one for tilt and one warp deformer for up/down.
If you want to create two deformats in succession, you can press [Create Consecutive Deformats] on the far left to continue creating deformats. 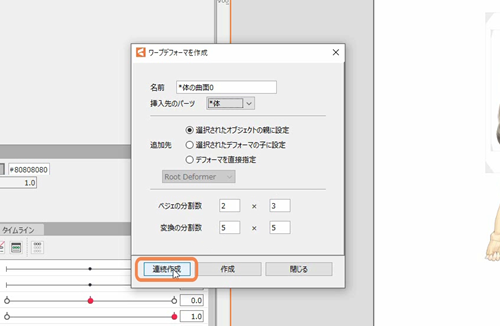 To put an object into a deformer, drag and drop it from the deformer palette. 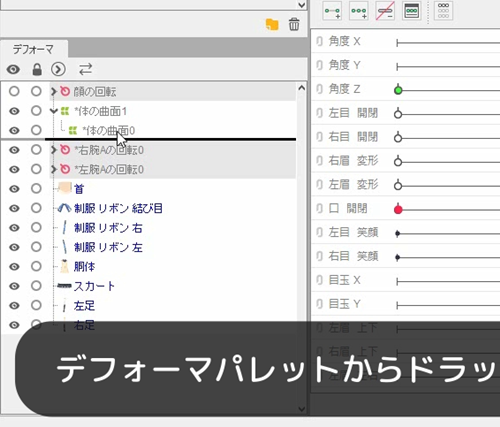 Alternatively, the object can be placed in a deformer by selecting the deformer from the inspector with the object selected. 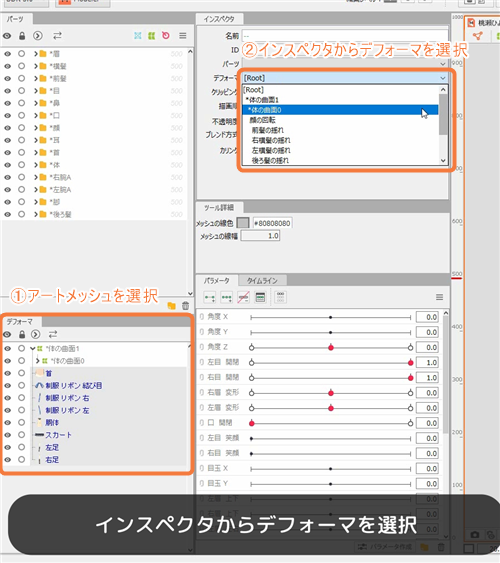 The ups and downs of the body are moved by the parameter [Body Rotation Y]. Insert 3 points as you make a move up and a move down.
If the feet float, it will be difficult to attach motions, so deform the feet so that they do not leave the ground surface. 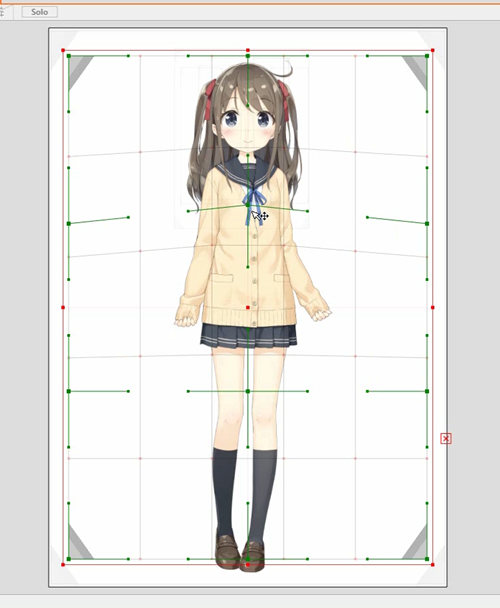 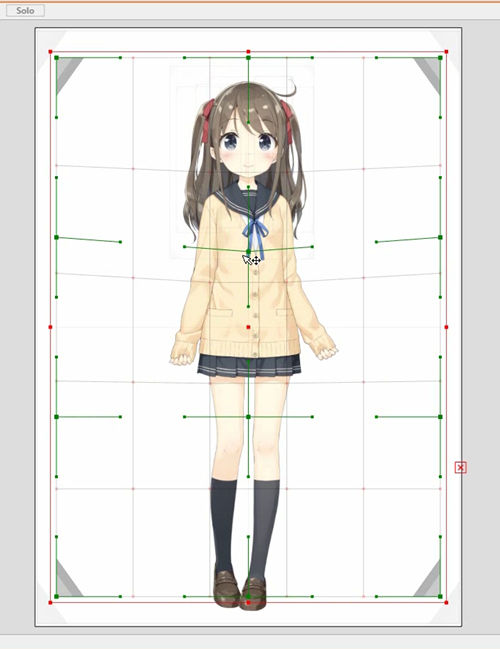 The tilt of the body is moved by the parameter [Body Rotation Z].

The tilt of the body should be transformed into an arc, rather than translating sideways.
For male characters, I think it would be better to make a movement to shift the center of gravity. 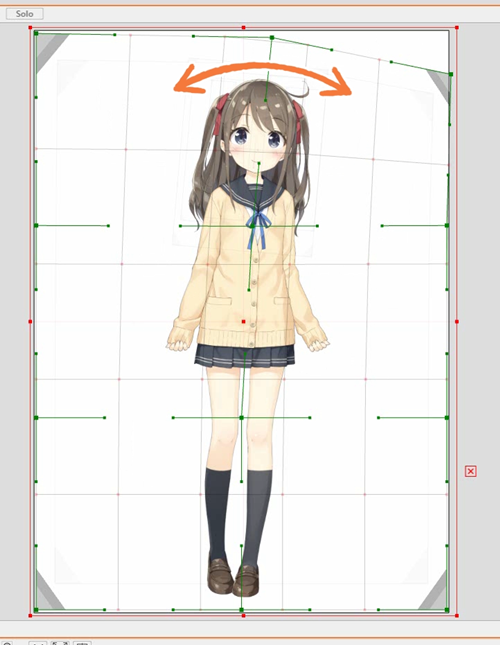 This is the end of this motion attaching.
If you use deformers well, you will be able to create a variety of movements.
The basic method of adding movement is the same for all parts, so try moving the character around a lot while referring to sample models.
Also, the movements we have made so far are enough to move the characters, so try your hand at animation!