Live2D Cubism gets a major update to version 4.1!
Please see below for a detailed description of the new features.

It can also be used for form animation (FA) since it does not modify the model data structure.

You can create a disposable deformation path that allows you to deform the vertices of the selected object.
It can be deformed to bend along a path.

A grid of control points allows you to deform the vertices of the selected object.
It is also possible to edit the grid by increasing or decreasing its columns and rows according to the situation.

Objects with vertices can be deformed in various ways.
The following deformations are supported, allowing you to efficiently create the shape you want to make.

This function creates and edits ArtPath to match the stroke.
ArtPath can be placed in line with strokes drawn with pen tabs, etc., as if they were drawn directly on the canvas.

It is also useful for redrawing ArtPath.

Added the ability to create a mesh with strokes in mesh edit mode.
Dragging the canvas creates a path from which a mesh can be created.

The polygons of the ArtMesh are divided by tracing the area to be meshed.

This tool allows you to intuitively deform ArtMesh, ArtPath, and warp deformer shapes with a brush.
Select an object and drag the area you want to deform to deform it.

Dopesheet and graph editors have been greatly improved.
Major modifications have been made to the editing of Bezier curves, mainly in the Graph Editor.

Self-adjusting handle:
In Bezier curve editing, the front and rear handles now extend and retract to prevent the curve from bending through.
It also expands and contracts in the same way when moved on the dope sheet.

Continuous Beziers:
Edit so that the front and rear handles are aligned.
Useful for adjusting smooth curves.

By default, holding down [Ctrl] and moving a handle will result in continuous bezier editing, but you can also change
the default setting by checking the [Always edit continuous Beziers] in the [Palette Menu] in the upper right corner of the timeline palette.
(Press [Ctrl] to reverse the function.)

Box Editing:
Keys no longer disappear when transforming a box in the selected state.
Narrowing the width of the box will place the keys as close together as possible.

In addition, the original shape is remembered until the box disappears, so curve information is not lost even if the box is repeatedly deformed.

Copy and Paste:
Copy and paste can now be used within the graph editor.
One curve can be pasted into any other curve at any position across scenes and animations.
In the case of multiple curves or form animation curves, the curves are limited to the same curve.

Edit curves by dragging:
It is now possible to grab a curve and edit its shape.
It is useful for creating rough shapes.

Curve Preset:
Frequently used curve shapes can be applied to a specified curve at the touch of a button.
This is a useful function that can also be utilized for character movement, although it is often used primarily in motion graphics.

Smoothen curve:
Shapes the handles before and after the selected point into a straight line (continuous Bezier).
It can be selected from the right-click menu and applied to a selection key or to the entire selection curve.

Enable smart snap:
Round the value of the selected points.

Display parameter name at key position:
If the [Display key name] checkbox in the Timeline menu is checked, at the key position in the graph editor,
the name of the parameter will be displayed. 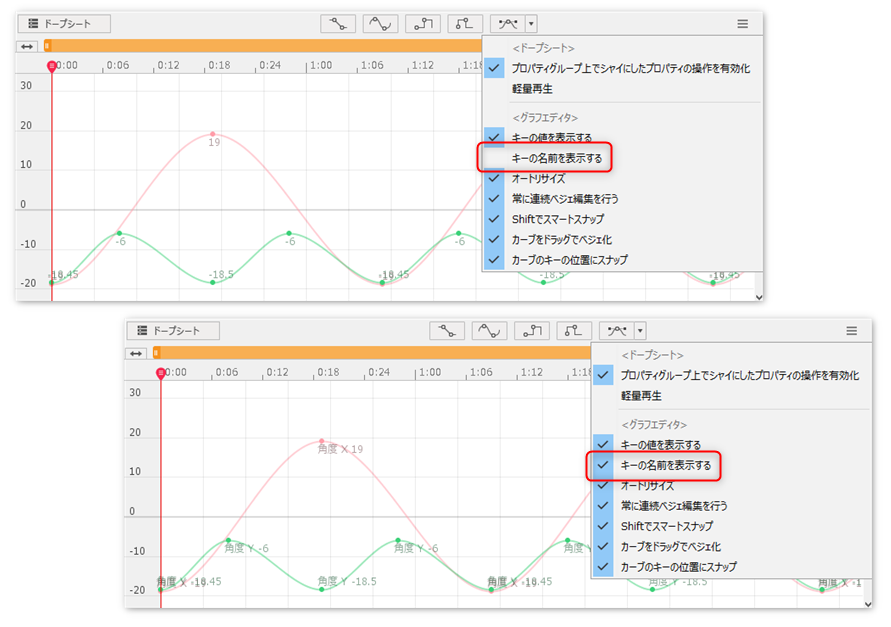 Key additions:
In the case of Bezier curves, handles are automatically created while preserving the curve shape as in the Graph Editor.

Change of value:
When editing with the parameter slider, the original shape is maintained as much as possible, even if the handle reaches the upper or lower limit until a decision is made.

Increase parameter input accuracy:
Editing Live2D parameters while holding down [Shif] allows you to enter detailed values.
This function is useful when fine adjustments are required.

Form Animation Key Moves:
Adjust the values so that the curve editing limited to form animation maintains a base point value (the same value as the frame value) that reflects 100% of the deformation when the key is moved.

The ability to copy and add part or all of a scene from another animation file.
Reference information for materials such as models and image files is also copied as needed. 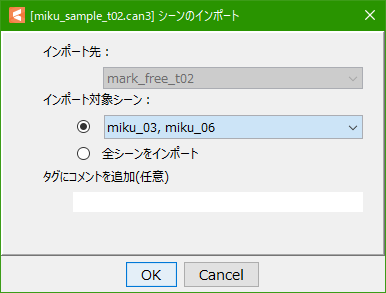 The onion skin feature, which has been available as a beta version since Cubism 4.0, is now released as an official version.
In addition to the substantial addition of configuration items, improvements have been made in terms of ease of use, including access to functions.

A button added to the bottom of the view area allows the onion skin to be turned on and off without having to open it from the menu.
The ON/OFF status is linked to the open view ([Modeling], [Animation], [Form Animation]). 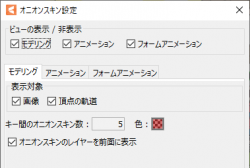 Visualize the display range of the onion skin on the timeline

The red bar displaying the onion skin range can be toggled between [All Frames], [Key Frames], and [Onion Skin Markers].

The following settings are available in the animation view. 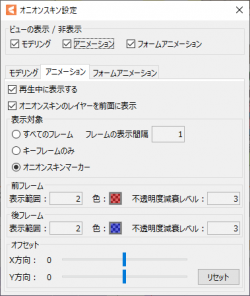 Displayed in:
The target frame for displaying the onion skin can now be selected.

Opacity downside:
The opacity of onion skin frames can now be set to decay as one moves away from the current position.
The lowering range can be set in 10 steps.

Offset:
A setting to shift the drawing position of the onion skin in the X and Y directions has been added.
This function is useful when you want to check the previous and next frames on a track with few coordinate shifts.

The following settings are available in the form animation view.
* Both are almost the same function as the setting of the same name added to the Animation View. 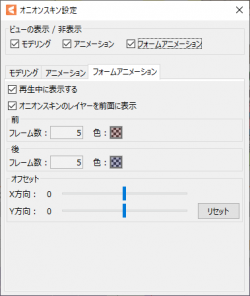 Click on the [View] menu -> [Hide selected state].
When an object is selected on the canvas, the UI (ArtMesh vertices and mesh lines, deformer border lines) are hidden.
Shortcut keys can also be used to hide the UI on the view that appears in the selected state. 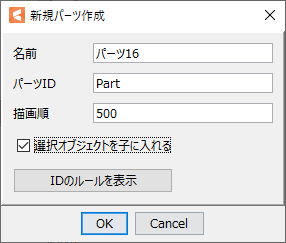 For objects such as ArtMesh and warp deformers, if the number of vertices is the same, you can use [Copy Shape] on another object
to paste.

Added [Replicate parameters] function to the right-click menu of parameters.

Duplicate parameter settings only.
(Objects and key forms are not duplicated) 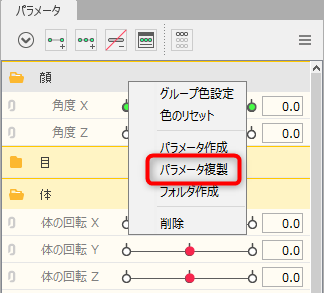 Automatic layout of texture atlas editing can now be configured to fix magnification, allow rotation, etc.
In addition, while previously it was only possible to automatically place images so that they did not overlap, we have added a setting that allows mesh to be placed in such a way that they do not overlap.

Copy and export the animation file along with the material being used.
It can be used to archive animations and pass them on to other workers,
to avoid accidents such as loss of material files or broken links.

This function allows you to solo only the target track on the timeline palette.
By pressing the [Solo Display Button] added to the right of the track's display button (eyeball button), only that track can be displayed alone.

Change by dragging the display and lock buttons

The [Track display] and [Lock] buttons on the Timeline palette can now be continuously toggled by dragging.
Buttons on multiple tracks can be switched on and off more quickly.

[OW Viewer] The function to reproduce motion playback of SDKs prior to 4.0 has been added.
If you are using the SDK (Others) in the target version, please consult with the developer and consider whether to check the box. 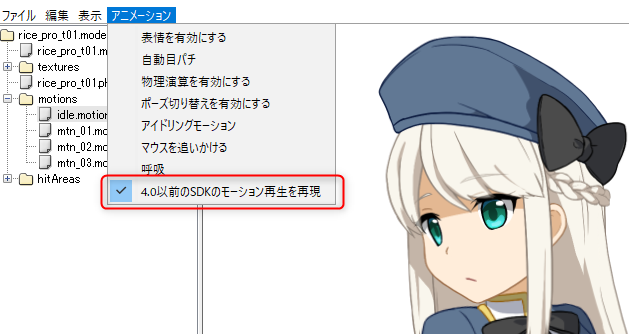 For more details, please refer to the page “Degradation of motion3.json reproducibility” in the [Cubism SDK Manual].

The Viewer can now do exactly the same thing as the [Cursor Tracking Settings] in the Editor's Physics and Scene Blend Settings dialog.

Some icon and cursor design changes

The following icons in the [Mesh Edit Tool] under Manual Mesh Editing have been redesigned.
(The cursor used to change the icon design is also changed.)

The following icons in the [ArtPath Tools] have been redesigned.
(The cursor used to change the icon design is also changed.)